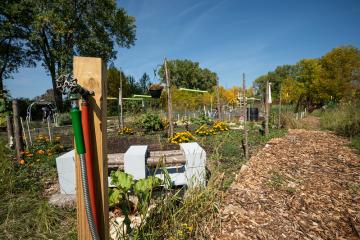 Lewis, herself an Eagle Scout mom, has a connection with scouting that spans more than 20 years. She is the merit badge counselor for chemistry (with her workshops held at UWO Fox Cities for more than 10 years) and conducted the first merit badge workshop held on campus. Over the years, workshops have ranged from communications and sculpture to auto maintenance, scouting heritage and family life. 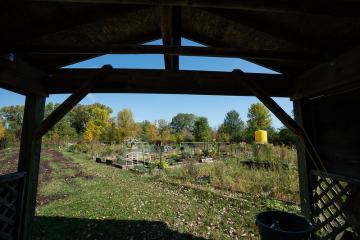 Lewis said she is proud of the UWO Fox Cities Chemistry Club and the community outreach they do every year. The club has provided financial support for her chemistry workshops, but it reached a whole new level last year when it provided a $3,500 donation to go toward any Eagle Scout project of Lewis’ choosing.

She earmarked the donation to the Community Garden beautification, but the project was still about $1,500 short of necessary funds.

Eisen, who had already been funding food and drinks for the volunteers, started a Go Fund Me page, but his only donors were his grandparents.

Late this summer, Eisen and his team of workers including his dad, Abe Eisen, rented an auger for several days as they dug holes for 43 fence posts installed 15 feet apart, attached fencing and poured concrete to secure the corner posts.

The work was reminiscent of the exhausting efforts of Eisen and some of his troop-mates and parents in August 2019. The group dug and hand-cut 15 years of buckthorn and other invasive plants that had encroached the garden and cleared out the plots that Bultman requested to add to the gardens’ capacity.

“That’s what you get when you have a determined Eagle Scout,” Lewis said.

Assistant Chancellor for Access Campuses Martin Rudd, a member of the Boy Scouts of America Bay Lakes Council Board and a Queen’s Scout award holder (the United Kingdom equivalent of the Eagle Scout award) said work completed by Eagle Scouts has special meaning to him. 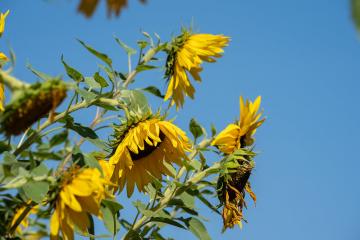 Rudd said he is pleased that UWO Fox Cities continues to be a welcoming place for community-focused projects.

“In the case of the Community Gardens, the addition of a secure fence makes the plots more useable. With the added interest in growing seasonal produce in the Fox Cities as a result of the COVID-19 pandemic, we are able to offer these spaces with the help of a volunteer organizer,” Rudd said. “I am impressed with the generosity of the student-led clubs on campus that did fundraising for purchase of the materials.

“We want the scout to show they have the ability to work with other organizations, make choices about processes and organizing and, finally, lead a group to achieve a goal,” he said. “The projects are amazing. The skillsets that the projects require show extraordinary abilities for a teenager. Once a young person realizes the power of their ability to make the world a better place they are ready to become an Eagle Scout through an award, but also because of the choices they can make in how they live their life.”

Voelker, who earned Eagle Scout in 1977, noted that Oct. 1 marked the first day young women can earn Eagle Scout and he’s already signed applications for two to complete their process.

Eisen said he has a couple of requirements to finish this month and “a lot of paperwork” as he closes in on the Eagle Scout merit badge. He said he’s proud of himself and his small scouting troop for being serious about “getting things done and having fun too.”

He said he and volunteers put 365 hours into the project.

Eisen’s next goal is getting a job―something he didn’t have time for as he pursued his Eagle Scout badge.

After high school, Eisen plans to attend UWO Fox Cities and the Oshkosh campus to earn a bachelor’s degree in criminal justice.

“As a kid I always loved helping people,” he said, adding a stint with the local police Explorer program helped him make up his mind.

Lewis said she is proud of Eisen for his perseverance improving the garden.

“With all of the problems associated with this project, I would not have blamed him for bailing on it…but he stuck it out,” she said. “(He endured) getting funds together for an expensive project, terrible fall weather last year delaying the installation of the posts, COVID shutdown this spring and most of the summer and awful compacted clay soil that jackhammers had a devil of a time getting through.

“It is completed. Done. Finished. Hallelujah.”