Miller, who has spent nearly three decades in city government, is campaigning on experience with goals to improve roadways, invest in the city’s capital expenses without raising taxes, and get the long-awaited amphitheater up and running.

Sluss, if elected, said he would also prioritize road improvement projects, as well as work to attract businesses and reduce crime in the city.

Both candidates have lived in Waite Park most of their lives. 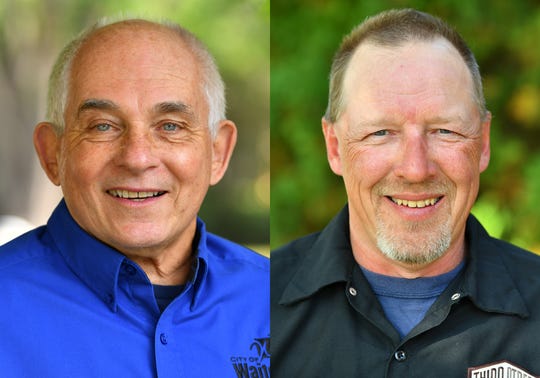 Miller, 72, graduated from Technical High School and worked as a network technician for the telecommunications company now known as Lumen Technologies. He retired in 2001 and is married with two children and four grandchildren.

He owned Green Cab for nine years and has worked at the construction equipment supplied Ziegler CAT for the past two years. He is married with seven children and 14 grandchildren.

While Sluss has never run for elected office, he is active in American Bikers for Awareness Training and Education and Bikers Against Child Abuse.

Miller served on Waite Park City Council from 1986-1995 and as mayor from 1996-2001, when he was unseated by Carla Schaefer. He then waged a successful write-in campaign in 2007 and has been re-elected five times since.

“I would like to see the roads worked on a little bit better. Our city workers need updated equipment, I know that,” Sluss said. “It’s Minnesota so I understand it, but some of them are pretty bad.”

Miller agrees several roads need improvement — and said the city has a plan to improve them over the next 10 years.

“At least in the state of Minnesota, the roads are in terrible shape — and Waite Park is no exception. And people see that. Every day they drive, they hit a bump,” Miller said.

MORE: Hey Minnesota, you can start voting! Here’s a guide for early voting in and around St. Cloud

The recession could wreak havoc on the budget, though. While it hasn’t affected next year’s budget, Miller is anticipating the recession to affect the 2022 budget because property values will likely decrease — and that’s the year the city will see the impact from the reduction in taxes.

“Trying to get things done, trying to keep up with everything and keep citizens happy as far as services and yet still keep the taxes low — it’s going to be a challenge for the next one to two years, I think,” Miller said.

The city’s preliminary 2021 budget shows an increase, but the council has agreed it needs to reduce the budget so taxes don’t go up unless a person’s property value goes up. The final budget and levy is approved in December.

“We’re figuring out where we can trim,” Miller said. 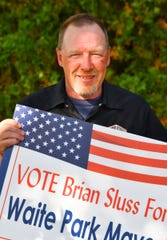 Sluss is also campaigning on reducing crime. He cited a 2019 FBI report that compares the number of crimes to the city’s population size.

Miller said those reports are often skewed because Waite Park has only 7,700 residents but many businesses so the high number of thefts inflates the crime rate. The report shows property crimes outnumber violent crimes 26 to 1 in Waite Park.

“If elected, I would like to look into that deeper and find out what it all entails,” Sluss said. “I just saw the numbers and was like, wow.”

Sluss said he is also concerned about the safety of renters and business owners. He said he previously dealt with a landlord who didn’t fix a leaky roof and it took the city a long time to respond.

“I think that’s where I see our weakest point right now,” Sluss said.

Sluss said he thinks he’s the best candidate for this role because he’s a leader who listens to all sides before making decisions — and isn’t afraid to say yes (or no) even if he’s disagreed with.

He said he is running for mayor instead of City Council because the mayor serves a two-year term, as opposed to a council member’s four-year term.

“I’m hoping that it goes long enough that I could switch over,” Sluss said. “But I’m new to this and I don’t want to get in over my head, if that makes sense. I don’t want to hinder more than I help.

“I’m a hard worker and I don’t stop,” he later continued. “When I say I’m going to do something, I do it. I do everything in my power to achieve whatever goal I set for myself or for the people that I work with.”

Miller said he thinks it would be a “tough go” for the mayor and city staff if the elected mayor hasn’t been involved in city business as a member of the park board, planning commission or council.

MORE: The Ledge Amphitheater, built for 5,000, is nearing completion. But when can it open?

“I’ve done just about everything,” Miller continued. “The only reason I haven’t been on the park board or the planning commission is because they (didn’t exist) until I became mayor.”

The person elected mayor will serve a two-year term beginning in January.

In Waite Park, the mayor earns $7,200 annually with the possibility of an additional $2,400 dependent on the amount of special meetings they attend each month.

Jenny Berg is the cities and schools reporter for the St. Cloud Times. Reach her at 320-259-3680 or [email protected] Follow her on Twitter @bergjenny.