Headquartered in Conway, Arkansas, Home BancShares, Inc. (HOMB) is a $16.9 billion asset holding company and parent to Centennial Bank, a Southeastern commercial and retail bank. Centennial provides a wide range of commercial and retail banking services to businesses, developers, and individuals. With its more than 165 branch location, Centennial offers services across the state of Arkansas, the panhandle and south Florida, Alabama’s Gulf Coast and New York City.

While HOMB has continued to grow much faster than bank peers, some have called into question the long-term net interest margin (NIM) potential juxtaposed against the rate of future earnings growth. While credit is difficult to forecast, I do believe future net charge-offs (NCOs) are going to be limited in nature. Expense management has been a clear priority for the management team, and in my mind, it will be the swing factor for future profitability.

Today, my bullish stance is driven by two major variables. First, upon further review of the credit portfolio, I believe that HOMB is set up well to absorb all future NCOs that might hide in the lending portfolio. Second, and this one is geared more for the longer term, I believe the NIM is rather resilient at a ~4.00% level. While it is clear that I do have it working lower, HOMB’s niche lending and superior deal placement should warrant higher loan yields.

It’s always frustrating to see banks prove their strong profitability ratios, only to have shareholders compress valuation simply due to peers working lower. Banks often trade in tandem with one another and their valuations rarely get out of sync, at least from a relative comparison. In my mind, once there are some signs of sustainable economic growth, or a more productive yield curve improvement, I believe HOMB will be one of the first banks to recapture their pre-COVID valuations.

When looking at the chart below, one can see that HOMB has historically traded near 3.0x to 3.5x price to tangible book value per share. Today, it trades at roughly 1.8x to 1.9x per share (at ~$16.50). If my thesis is correct and the bank does work higher toward previous valuations, something closer to 3.0x would indicate at $27 price target (or a ~60% upside from current levels).

In the second quarter, fully taxable net interest income came in at $150.1 million, which marked a sizable $9.1 million improvement from first quarter levels. Like most banks, HOMB had a pretty sizable drop in loan yields, falling from 5.79% in the first quarter to 5.43% in the second. The main reason why net interest income improved quarter over quarter was due to the $9.5 million reduction on deposit costs.

The second quarter NIM was 4.11%, which was down about 11 basis points from the first quarter levels. In my mind, this shows a rather impressive resiliency in the margin, especially since the difference between first and second quarter results was impacted by a very accommodating Federal Reserve. HOMB also funded roughly $850 million in PPP loans, which carry a much lower interest rate. If one were to back those out of second quarter results, the NIM would have only fallen 6 basis points linked quarter.

While HOMB has never really depended on revenue to come from non-interest income, the second quarter fee income did post solid results. While service charges were a little lower in the second quarter, the company had pretty substantial results from its mortgage operations. 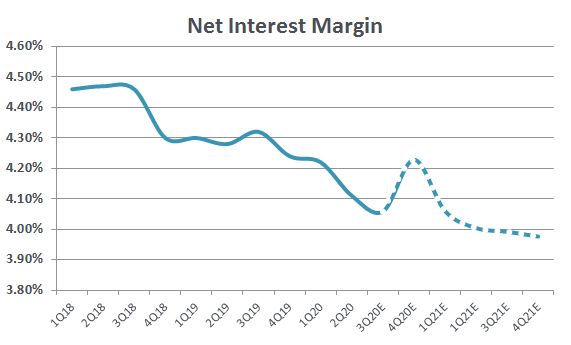 As one can see from the chart above, I am modeling the margin to work a little lower. I think loan yields continue to compress a bit since they are on a rolling schedule (i.e. not all loans are floating and move instantly). Also, future deposit costs can only work so much lower before they will have limited mitigating effects. Once PPP loans work off the balance sheet, the NIM is likely to hold at about the 4.00% level (give or take 5 basis points).

I think future loan growth will be a little softer than what HOMB investors have come accustomed to seeing, but it should outpace most bank peers. While fee income was very addictive in the second quarter, in trying to be a little conservative in my modeling, I am planning for much more modest results.

While most banks strive for an efficiency ratio that is in the 50s, HOMB has successfully operated a bank that often times touched the mid-to-upper 30s. Recall, the efficiency ratio is total expenses divided by total revenue. Another way to think about it is, “how many pennies does it take to generate a dollar of revenue”. 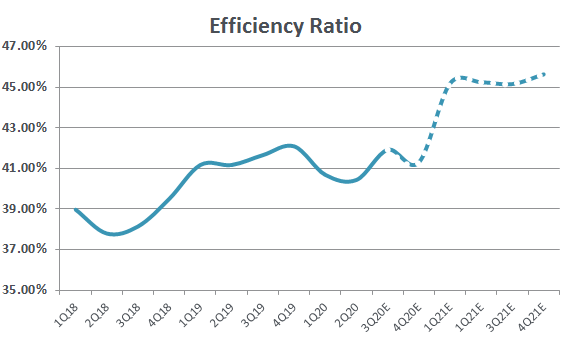 In the second quarter, overall expenses were $80.2 million. This marked a roughly $2 million increase from the first quarter level. When looking at each line-item, it is clear that “occupancy and equipment” drove the incremental cost base higher, which makes some sense as more equipment is needed to support people working from home.

When looking at the chart below, 2010 comes into mind as being a difficult year. While the credit fundamentals at the bank have operationally changed, it’s difficult to get a sense of how they will perform in the second half of a recession. The blue line on the chart below, from 2015 to today, indicates that NCOs have been incredibly limited in nature, which gives me comfort for the future. 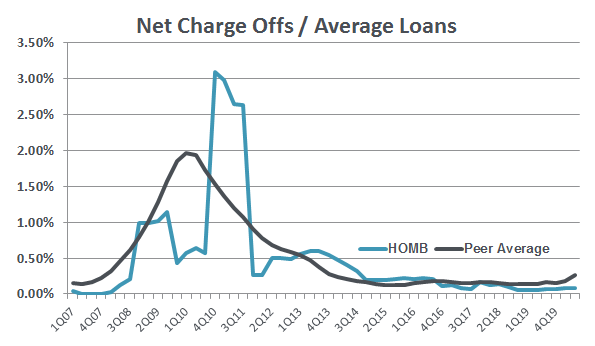 At the end of the second quarter, HOMB’s loan loss reserve stood at $238 million, which accounted for about 1.99% of total loans. After backing out PPP loans (which carry no risk since they are backstopped by the government), the reserve ratio was 2.15%.

In my mind, the best comparison to measure credit soundness is to match the bank’s loan loss reserve relative to its nonperforming loans. In doing so, the reserves are nearly 4.0x bigger, indicating that if all bad loans did actually get charged off, the balance sheet would still look pretty healthy and equity shareholders would not be impacted.

Banks can be very fickle. The entire bank group often experiences valuation changes as a group, which can be very frustrating, especially for shareholders in a bank like HOMB. HOMB continues to operate well, but since the valuation was somewhat excessive relative to peer banks, which were experiencing valuation compression, HOMB went down too.

I understand and agree with the argument that in a slower economy, or even a recession, the NIM should work its way down a bit. However, when I model that to happen, HOMB continues to report profitability levels most banks can’t touch even in the most pristine operating environment.

HOMB is set up to generate better earnings than peer banks, in every environment, which is why it continually holds a premium valuation to peer banks. When the economy turns positive, I think banks will work higher, and HOMB should have best in class share price returns.