Fraser — Macomb County will receive $12.5 million to settle a lawsuit it filed against contractors that caused a sewer collapse and football-field size sinkhole on Christmas Eve 2016.

Macomb County Public Works Commissioner Candice Miller said Tuesday the insurance company for the three contractors sued by the county agreed to pay the settlement after about a week of mediation.

“I’m very proud to tell ratepayers … that we have come to a settlement agreement of $12.5 million,” she said during a morning news conference held near the site of the sinkhole that opened up on 15 Mile near Utica Road in Fraser. “That’s the biggest award that the Macomb County government has actually ever received in history. We’re feeling pretty good about the award.” 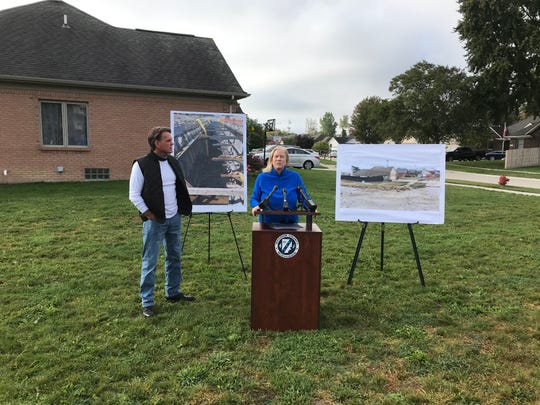 Macomb County Public Works Commissioner announces Tuesday the contractors it sued over a sinkhole that appeared Dec. 24, 2016 on 15 Mile in Fraser have settled the matter for $12.5 million. (Photo: Charles E. Ramirez, The Detroit News)

Miller was joined by Macomb County Executive Mark Hackel and her staff at the news conference. The site of the event was a vacant lot on Eberlein Drive where a house that was damaged by the sinkhole was later demolished.

“Candice was adamant about finding out what happened here and she never lost sight of that,” Hackel said. “And that’s why we’re here today. This is the largest award the county has ever received in any type of litigation. Candice, congratulations and well done to you and your staff.”

The money is being paid out by the Illinois Insurance Company,  part of New York-based insurance company AIG, she said. In exchange, the county’s lawsuit against the contractors in Macomb County Circuit Court will be dismissed.

The money will be used to help pay for a $28 million project to upgrade another part of the sewer line, the public works commissioner said. Under the project, a new lining will be installed in the sewer line under 15 Mile from Hayes Road to a high voltage transmission corridor in Sterling Heights.

She praised her staff and other county employees involved in the legal matter. 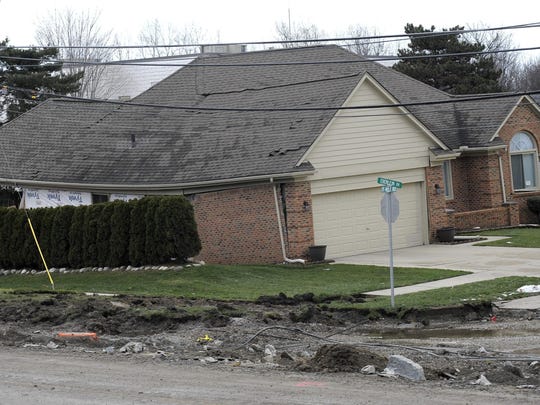 Miller said if the county would have continued to pursue the issue in court, it could have taken at least three years to resolve and would cost the county millions of dollars in legal fees. There was also the matter of the statute of limitations.

“We would have really been rolling the dice, spending a lot more money and maybe not getting anything,” Miller said. “We did what we thought was the proper thing and accepted the mediation award.”

On behalf of Macomb County, the Macomb Interceptor Drain Drainage District board in April 2019 sued the contractors over the sinkhole. The board is made up of Miller, a representative of Hackel’s office and Macomb County Commissioner Robert Mijac, D-Sterling Heights.

Miller said all three companies were performing work on the pipe system for Oakland County in 2014.

She said all three also claimed human error was to blame for circumstances that opened a crack in the sanitary sewer pipe, caused infiltration of sand into the pipe, and eventually caused the collapse of the sewer and the ground above on 15 Mile at Eberlein.

The work near Eberlein and 15 Mile was tough to endure, neighbors say, and they’re glad it’s over. (Photo: Charles E. Ramirez, The Detroit News)

Miller said her office hired one of the best forensic engineers in the country to investigate what caused the sinkhole. He determined someone in May 2014 released sewage in the pipeline in about seven minutes when it should have been gradually released over two to three hours.The sewage flow rushed through the line, slammed into the side of the unreinforced concrete pipe where it made a turn and created a fissure that grew bigger over the next two years and culminated in the sewer’s collapse, she explained.

The collapse resulted in 23 homes being evacuated, three homes being condemned and two of those houses later being demolished.

It took the county about nine months to repair the collapsed sewer and sinkhole. The bill for the repairs totaled about $70 million.

More: Fixed in Fraser: Sewer pipeline back in action

John Finegan, 86, of Clinton Township and his wife, Helen, live in a condo on King’s Forest Boulevard and across from where the sinkhole opened up. The couple came to the news conference to hear Miller’s announcement and spoke to the media when it was concluded.

“The whole thing was frustrating, but now we’re happy,” said Helen Finegan, who lived in the condo for the last 16 years. “And I hope this is going to be the last one. It cost us a lot of heartbreak.”

Finegan said some of the heavy machinery for the project that used his condo complex’s streets caused more than $40,000 in damage that the condo association had to pay. He said he wasn’t too happy about it, but accepts it.

Overall, he said, he’s glad the project is over. “They did a good job,” he said.

The sewer that collapsed Dec. 24, 2016, is part of the Macomb Interceptor Drain and is owned by Macomb County.

The sewer line is an 11-foot-diameter pipe that runs 60-feet underneath 15 Mile on the border between Clinton Township and Fraser. It serves more than 500,000 residents and some 40,000 businesses in 11 communities, transporting sewage into a network that leads to a wastewater treatment plant in Detroit operated by the Great Lakes Water Authority.

Miller, a Republican from Harrison Township, is seeking re-election as the county’s public works commissioner on Nov. 3. She is being challenged by Democrat Toni Moceri of Warren.