A witness called 911 to report an explosion at a chemical plant in Palm Bay.

Back in February, disregarding warnings of danger, the Palm Bay City Council voted 5-0 to rezone land bordering FAR Chemical’s industrial plant for construction of up to 699 homes and 190,000 square feet of commercial space.

On Sept. 8, FAR Chemical was rocked by a series of window-rattling explosions, sparking large fireballs and shutting down U.S. 1 as police and firefighters converged on the scene.

Now, the City Council will re-hear the 22-acre multifamily housing-commercial construction proposal during a special meeting at 6 p.m. Tuesday.

“Nobody ever wants to see an accident happen. But it doesn’t matter how well-prepared you are: Accidents happen,” Joe Beatty, vice president and general manager of FAR Chemical, said Monday.

“I can’t imagine if there were 500 or 600 multifamily home units that close — and if they had already been built? God, it’d just be awful,” Beatty said.

Council members unanimously voted to rezone the property, even though FAR Chemical officials publicly warned that future residents could be exposed to hazardous air emissions — such as an acidic cloud spreading from a burst 1,000-gallon bromine tank.

FAR Chemical’s parent company filed a pair of lawsuits against the city in March, asking an appellate court to overturn the rezoning. And on Sept. 17, Brevard County Circuit Judge John Dean Moxley ruled that all action taken during the February meeting was of no legal effect.

Why? Moxley ruled that Palm Bay officials had failed to comply with mandatory notice requirements prior to the February meeting, per Florida Statutes. City officials had published advance notice in Trader Jake’s.

“What the developer was attempting to do was a comp plan amendment and a rezoning. Those types of actions have a heightened notice requirement. And the advertisement in Trader Jake’s did not satisfy those heightened requirements in the Florida Statutes,” said Samual Miller, an Orlando attorney representing FAR Chemical. 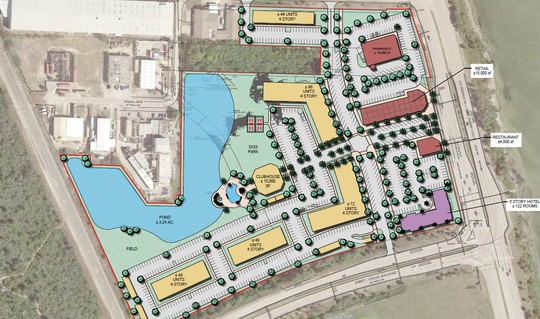 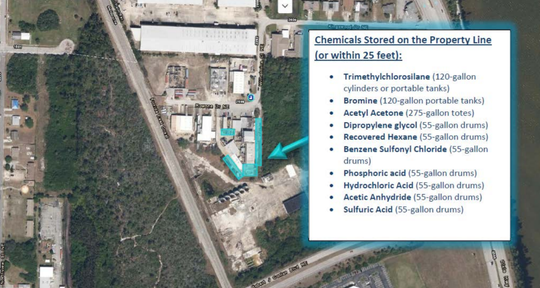 This map lists chemicals that are stored within 25 feet of the FAR Chemical property line, most of which borders the 22-acre proposed development. (Photo: Palm Bay City Hall)

Beatty said the source of the explosions was a malfunctioning “reefer,” or refrigerated unit, that was stationed on a concrete pad behind the plant.

Miller said the FAR Chemical lawsuits argue that the City Council did not receive competent, substantial evidence before casting votes. He said the industrial plant — which started operations in 1983 — is incompatible with the housing proposal.

“We operate a chemical facility. And what we argued in our complaint is, putting residents within a couple hundred feet of a chemical plant is simply inconsistent and incompatible,” Miller said.

“We’re going to make that argument again to the City Council. And hopefully, they’ll listen this time,” he said.