Member Brad Boyd tees off on number ten at the Henderson County Golf Course Friday. The 142-acre 18-hole course has been sold to Charles Morris,one of its members, October 1, 2020. (Photo: MIKE LAWRENCE / THE GLEANER)

With a toast of champagne and expressions of thanks, members of the Henderson Country Club last week celebrated the sale of the golf course to one of its members.

With it, club advocates and staff hope to see the golf course rebound and recapture some of its previous popularity and remain in operation for years to come.

“Thank you for your support,” Charles Morris, who closed on the purchase of the 18-hole, 142-acre course on Tuesday, said during a celebration at the club’s upstairs banquet room.

“We appreciate what you’re doing,” Eric Williams, who has been president of the club’s board of directors, replied.

A deed recorded at the Henderson County Courthouse indicated that Morris Enterprises LLC paid the country club just over $1 million for four parcels of real estate. But Morris said he has also agreed to make a “considerable investment” to enhance the property and operation. 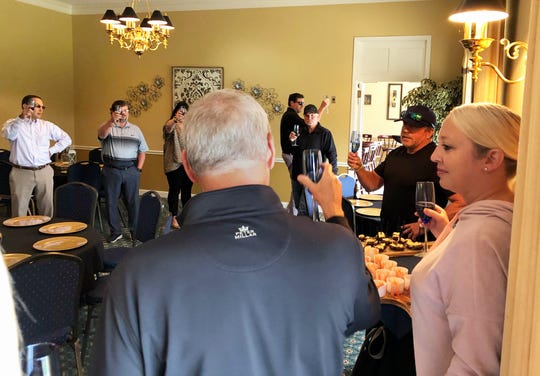 Celebrating his purchase of Henderson Country Club last Tuesday, Charles Morris (second from right) toasts with club members, directors, staff and others in the banquet room of the clubhouse. (Photo by Chuck Stinnett) (Photo: Chuck Stinnett)

In an interview, he outlined a vision for upgrading course facilities and services, making continued improvements to the golf course itself and rebuilding the club as a social venue.

And while ownership changes from an association into private hands, he said the facility’s name won’t change.

“We’re leaving the name ‘Henderson Country Club,’” Morris said. “I thought, it’s been around since 1899; it would be a disservice to change the name.”

The sale comes after