New move-in ready homes are available in Katy’s Cane Island, featuring a selection of three-, four- and five-bedroom designs. Plus, Cane Island homesites start at 50 feet in width, giving families plenty of open space and the feel of a larger property.

Plus, Cane Island builders are offering a variety of limited-time, money-saving offers on new, move-in ready homes, including money back at closing and free upgrades. Buyers can contact a builder representative for details. A limited number of homesites also are available on premium, acreage properties in The Estates, Cane Island’s custom-home neighborhood.

Visit www.CaneIsland.com for a complete list of the community’s move-in ready homes along with virtual tours of its model homes and community amenities. Or use the website’s chat feature to set up an in-person appointment.

An award-winning community of new homes, Cane Island offers the convenience of immediate I-10 west access, Katy ISD schools, proximity to major west Houston employers and an abundance of nearby shopping, dining and entertainment.

FROM THE VERY beginning of her kitchen design journey, Lauren Harte knew exactly what she wanted.

“I had a very clear vision in my head,” says Lauren, who moved into her new home in Mornington, Co Meath with her boyfriend in April.

“We were aware that there wasn’t much wall space, so we wanted to make use of the storage and get as much as we could into the island. We have a microwave, dishwasher, bin and sink all in the island.”

As well as maximising storage space, Lauren wanted her range cooker to be a focal point of the room. “My boyfriend is a chef, so cooking is a really big part of our lives. We wanted to make a feature of the range cooker with a really nice canopy.” 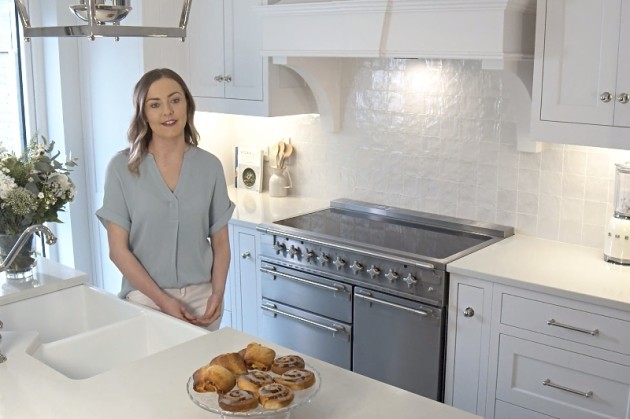 With her vision in mind, Lauren went to the Cash & Carry Kitchens showroom in Swords, Co Dublin.

Cash & Carry was actually the first shop I went into and they had the exact kitchen that I had in mind. I didn’t go to any other shops – that was the kitchen for us.

Here she met with design consultant Alan Larkin, who helped bring her ideas to life.

“One of the design issues Lauren had is that she went with a double sized Belfast sink,” says Alan. “She wanted the sink to be centred and with what she was fitting in on either side, it wasn’t possible unless we made some alterations to the units. That’s where the chopping boards came into it – they solved the problem.” 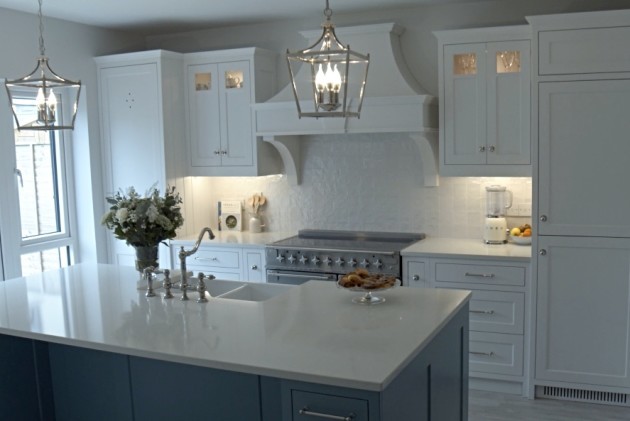 With her new kitchen in place – including a corner seating area –

This article is part of our latest Design special report, which is about taking creative leaps in challenging times.

It is not unheard of for ambitious homeowners to imbue a mere building with narrative dazzle.

But rarely is the mythologizing as specific and literary as it is for the Long Island guesthouse of Betsy and Bryan H. Lawrence: They call it the Narnia House.

Yes, it has a surprising installation, as in the classic C.S. Lewis novel “The Lion, the Witch and the Wardrobe.” Stepping through a French armoire at the top of a back stair leads to a second-floor passage and toward a Narnia-themed bedroom.

That fanciful concept — Ms. Lawrence’s idea, stemming from her love of the children’s book series — is only part of the charm of the red brick, five-bedroom home, originally built in the 1990s and acquired by the couple about three years ago as an addition to their adjacent family compound.

Making the guesthouse exuberant required the practical efforts of Thomas Jayne and William Cullum, of Jayne Design Studio in New York. The firm is known for deftly mixing the classical and the contemporary and for layering custom details — while remaining open to quirk.

“To me, it’s enchanted,” said Ms. Lawrence, a psychologist and artist who serves as president of the New York School of the Arts. Mr. Lawrence is an investor.

“It was an ugly duckling, transformed into a beauty,” she said.

The Lawrences gave the designers room to run. The property was intended as a place for entertaining, for displaying Ms. Lawrence’s own artworks and the rest of her collection and for billeting friends and family. So there was plenty of space for whimsy.

Initially, the house had some less-than-ideal characteristics. But Mr. Jayne does not see problems; he sees,

Dip-dyeing and painting large rope pendants and using shibori-inspired methods to spice up plain linen shades is a fairly new venture for Jacobs, who began producing his line of custom lighting in 1993. This winter, before shutting down work for a month due to COVID-19, he completed 15 five-foot-tall string fixtures for a hotel in the Bahamas by MR Architecture. The cord was plunged into a vat of golden yellow dye before completion. “For me, lighting is obviously about light, but it’s also about texture,” says Jacobs. “I’m not a big fan of the bare bulb look.” Ahead, the designer gives us a peek behind the scenes and reveals how he’s been making a splash this year with color.

In the 5,000-square-foot, first-floor space, Jacobs is joined by seven employees, most of whom come from art backgrounds. Together they work on everything by hand, with the exception of the metal plating and powder-coated frames. When Jacobs originally moved into the studio, he specified to the building where to place the junction boxes so he could suspend the fixtures all over the place. Most are operable so that the team has a bright spot to work; others, like the massive hanging white cage pendant lamp (pictured above), are on display for visiting clients.

In this scenario, the dramatic piece hangs extra low to the ground so you can really get a sense of its impressive dome shape.

The West Island has long been a place where the automobile is the primary mode of transportation for people to get around.

The sprawling landscape, low-density housing and malls with ample parking have made it much easier for people to move around by driving compared to taking buses and trains.

But some local mayors insists massive new parking spaces at REM stations and easy access to get to them are necessary to boost public transit.

“We need to have an access point like a massive parking lot, for example, as was proposed in the beginning,” Jim Beis, Pierrefonds-Roxboro Borough Mayor told Global News.

“The only way those systems work is you want to be efficient is getting the people there easily so that’s what we have to do,” he told Global News.

An online seminar, hosted by a local environmental health board, is studying all the options toward improving mass transit in the West Island.

The goal is to help make the Island of Montreal carbon-neutral by 2050 as proposed by the mayor, but the existing mass transit systems in place aren’t enough according to the host of the seminar.

“It’s not big enough yet to meet the targets for 2050,” Blaise Rémillard, of the Conseil régional de l’environnement de Montréal, told Global News.

Rémillard eventually plans to publish a list of recommendations to get toward a carbon neutral future.