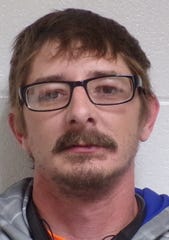 MUNCIE, Ind. — A Muncie man is accused of refusing to allow a contractor for the Indiana Department of Child Services to leave his home.

Michael G. Hoover, 34, was arrested Saturday, preliminarily charged with criminal confinement, battery and interference with the Department of Child Services.

A woman “who works with a company through (DCS)” told Delaware County sheriff’s deputies when she went to Hoover’s home — in the 3700 block of North Harvest Drive — on Friday, he was engaged in activity that violated an agreement with DCS.

Court documents did not specify what that behavior was.

After she told Hoover she would have to report the incident to her supervisor, she said, he grabbed a back pack she was wearing and pulled her back into his residence. She said he then blocked her access to steps on a porch for three to four minutes.

He then followed her to her car and for a time stood next to the vehicle.

The woman told deputies Hoover “didn’t want her to leave in fear that (he) would lose his children.”

He was later released from the Delaware County jail after posting a $10,000 bond.

Hoover was arrested in June after he was accused of battering a 13-year-old boy at his ex-wife’s Randolph County home.

His trial in that case — on counts of domestic battery and battery on a child — is set for Oct. 26 in Randolph Circuit Court.

In other crime news:

Hospital disturbance: A Muncie man was arrested after he allegedly caused a disturbance in the emergency department at IU Health Ball Memorial Hospital, in the process threatening to harm a hospital police officer.