German prosecutors and tax authorities searched offices of the German Football Association (DFB) as well as private homes of current and former officials on suspicion of serious tax evasion, the Frankfurt prosecutors’ office said on Wednesday.

It said six unnamed former and current officials of the DFB were suspected of having intentionally falsely declared income from advertising inside football stadiums during home games of the national team in 2014 and 2015 as income from asset management, leading to €4.7 million in unpaid taxes.

The DFB, which does not pay taxes for any income from asset management but is obliged to do so for earnings from any commercial activities, did not immediately respond to a Reuters request for comment.

Some 200 officials were deployed in the searches that took place across several locations in five federal states.

“Based on the investigation until now there is the suspicion that those accused knew of the tax incorrectness but consciously chose it to give DFB a major tax advantage,” the prosecutors’ office said in a statement.

It did not name the six people nor did it provide any details of their positions within the organisation.

This is the latest in a series of legal cases that have tarnished the world’s biggest football federation which was also investigated in relation to a suspected misuse of funds in relation to the 2006 World Cup in Germany.

Theo Zwanziger, who headed the DFB from 2006-2012, and his successor Wolfgang Niersbach were investigated for years in Germany and Switzerland over those allegations. Both have denied any wrongdoing.

Veterans groups rally at the Menlo Park veterans home after 62 residents died of Covid-19 on September 16, 2020.

The New Jersey attorney general has requested troves of documents from the Paramus and Menlo Park veterans homes in a far-reaching investigation of their high death tolls during the COVID-19 pandemic, and a state records review has increased total coronavirus deaths at the two state-run facilities to 190.

The addition of 47 “probable” deaths due to COVID-19 at the two New Jersey veterans homes means that nearly a third of the residents at each home died of confirmed or probable cases of COVID-19. Two nurses aides, one at each of the homes, also died.

Thirty-nine previously uncounted deaths at the Menlo Park Veterans Memorial Home make its 101 resident deaths the highest now reported at a New Jersey nursing home and the highest among state-run veterans homes nationwide. There were 300 residents at the home on March 13 when the homes closed their doors to visitors on orders from health officials. 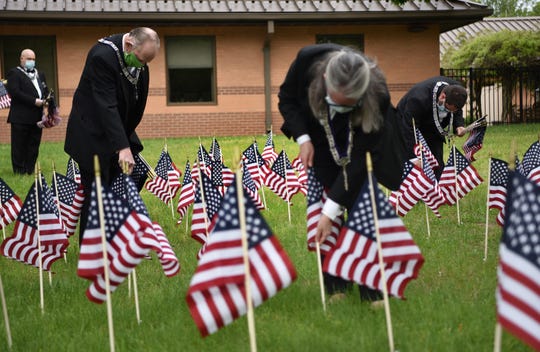 Members of the Passaic Valley Elks Lodge, including veteran Bob Keller, second from left, honor each of the over one hundred veterans who have passed away from Covid-19 at the New Jersey Veterans Home in Paramus by placing one flag for each veteran on the front lawn of the home on May 24, 2020.  (Photo: AMY NEWMAN, NORTHJERSEY.COM/ USA TODAY NETWORK)

At the Paramus Memorial Veterans Home, an additional eight probable deaths attributed to COVID-19 by the state Health Department increase its total to 89. Before the pandemic, the home had 312 residents. The number of probable deaths at each home was released this week after NorthJersey.com and the USA TODAY Network New Jersey asked for them.

The replies etched a clear pattern. Nursing homes were more than twice as likely to say they had no room when responding to inquiries from families saying they planned to pay for care with Medicaid — the government health program relied on by low-income residents — rather than paying privately.

Often the difference wasn’t subtle. In some cases, employees from the same facility would tell the daughter of a purported Medicaid applicant that there was a waiting list, while telling the daughter of a private payer, who could be expected to pay the nursing home nearly twice as much, she would be happy to discuss the options.

Discrimination against applicants covered by Medicaid has existed for years in the nursing home industry, say advocates for the elderly, and it can be illegal.

Massachusetts adopted explicit protections in 1994, barring nursing homes from discriminating against “any Medicaid recipient or person eligible or soon-to-be-eligible to receive Medicaid benefits.” The regulations also prohibit facilities from offering help “in the preparation of applications or in any facet of the admission process to private pay applicants in a manner greater than that rendered or offered to Medicaid recipients.”

And yet many nursing homes do appear biased against Medicaid patients.

“You have more choices if you have money. That’s the world we live in,” said attorney Steven Cohen, a partner at Pabian & Russell in Boston who specializes in long-term-care and estate planning.

Medicaid pays nursing homes an average $209 per day, far less than the $389 typically paid out-of-pocket by well-off senior citizens — a sizable difference for an industry plagued by ongoing financial struggles and closures — according to 2018 state data. The most exclusive nursing homes charge private-pay residents even more.