ROYAL PALM BEACH — Taking advantage of this prolonged stretch at home to make some changes to your surroundings?

© Palm Beach Post File Photo
The Expo Center at the South Florida Fairgrounds, seen here during an Antiques Festival in 2009, will play host to the Home Improvement and More Show on Oct. 23-25.


You’re not alone, and the staff of the South Florida Fair wants to help.

More: No stickball in Wellington this year, but Wycliffe league has terrific plan for $60 dues

The expo comes as recent surveys show a spike in home improvement projects in the U.S. since the country essentially shut down in late March because of the novel coronavirus pandemic.

A Porch.com study released in July found that nearly 80% of homeowners in the U.S. plan to launch a home improvement project in the next year.

More: This Wellington business opened during the pandemic — and it’s thriving

Most home shows since the pandemic were canceled, Pachis said, making the Home Improvement and More Show a rare standout.

While keeping an eye on the increase of demand for home improvement services and products, organizers have the coronavirus in mind for other reasons.

Attendees are required to wear masks, and social distancing is encouraged in the Expo Center, said Vicki Chouris, president and CEO of the South Florida Fair and Palm Beach County

The Public Interest and Accountability Committee has urged government to initiate punitive measures against contractors who execute shoddy works on oil-funded projects.

It explained that the petroleum revenues come from a depleting resource base, a reason the law provided for using Petroleum revenue in ways that support intergenerational benefit.

The Chairman of PIAC, Noble Wadzah made the call after he led a PIAC team to visit selected oil-funded projects in the Eastern Region.

The exercise forms part of the Committees regular activity to identify with effective use of the countries petroleum revenues.

Information made available to the PIAC Team indicated that the contract was awarded in November 2018. As at the time of PIAC’s visit, main construction works on the CHPS have been completed, finishing works were ongoing, while external works were underway. Supply and installation of medical equipment was yet to begin. The overall progress stands at 95 per cent.

The construction of the CHPS compound, which

With fall in full swing and winter soon approaching, now may be the ideal time to get any outstanding outdoor projects out of the way. There may also be the desire, with the change of seasons to execute not only necessary repairs and preventive maintenance but also upgrade to include some outdoor entertainment that can be enjoyed during colder months.

Here are some ideas as it relates to fall projects.

1. House painting. Looking to give your home a refresher? While many choose to paint in the Spring, the fall may be a good alternative season to refresh the outside of your home.

2. Outdoor Kitchens. Outdoor kitchens can be basic or elaborate. There are companies that will even create an all in one unit that just has to be hooked up with the help of professionals such as an electrician and or plumber. If you live in a colder climate, you will need to winterize your outdoor kitchen before freezing temperatures kick in. 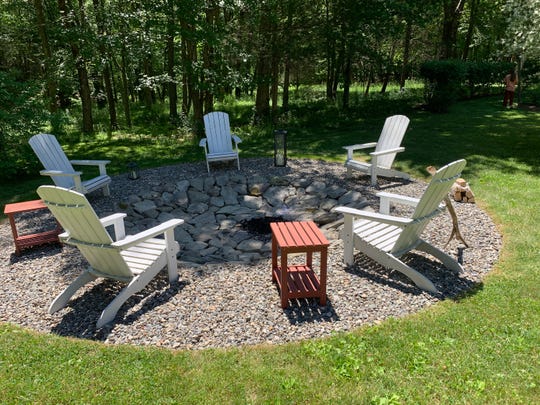 3. Saunas. With so many opting for a “staycation”. Saunas, which are relatively easy to install allow for an appealing outdoor oasis.

5. Fire pits. Fire pits are more popular than ever and are especially enjoyable on a chilly fall night!

6. Hot tubs. The transition from summer to Fall is typically a time when people look to close up pools and open hot tubs. Hot tubs can come in different sizes and shapes and remain a popular

Environmentally-minded DIY enthusiasts can now enjoy the first ever ‘green shopping aisle’–complete with a real grass walkway and a canopy infused with foliage and butterflies.

The green aisle is, quite literally, festooned with evergreen climbers and vegetation to help eco-conscious shoppers find the section of the hardware store that will make their home more sustainable.

‘The Green Aisle’ launches today at one of Britain’s major hardware chains,  Homebase. The first stores to get the foliage-festooned aisle are: Haringey in London, Edinburgh, Bridgend, Birmingham, and Leeds–with more stores to follow.

In partnership with Smart Energy GB, the aisle showcases eco-friendly and energy-efficient home improvement products, as well as information on how to get a smart meter installed, all in one place.

All of these efforts will help make homes greener and ready for winter.

‘The Green Aisle’ was created after research found 74 per cent of Brits are keen to make their home greener, but half have no idea where to start.

Craig Phillips, DIY expert and one of the first to visit the ‘Green Aisle’ in Haringey, said, “I’ve helped hundreds of people improve their homes over the years by making small changes which have a big impact–the same is true for taking small energy efficiency measures in the home.

“It can be hard to know where to start when it comes to making greener choices.

“The Green Aisle helps make this process even easier for people by identifying which products are more environmentally friendly, and likewise understand the positive impact they can have.”

Data from Energy Saving Trust also shows a household can save up to £581 ($751) on energy bills each year if they implement a full range of efficiency measures.

These include the purchase of efficient appliances