Since January, California wildfires have already burned more than 3 million acres, an area about half the size of Hawaii.

Thousands of properties are in the paths of the fires, and with many residents having evacuated, they often must wait days or weeks to find out if their homes survived.

Enter Dan Ryant. For three years, the Northern California man has trekked through neighborhoods devastated by fires with camera in hand, streaming the wreckage live on Facebook to an audience hoping to see if their homes are still standing.

His footage is often the first glimpse people have into their neighborhood after a fire.

“Good morning, everybody. I’m broadcasting again from Berry Creek, California,” one recent livestream began, before turning to some bad news.

“Back behind where these cars are here, it looks like another structure — I don’t know if it’s all part of the same property or not — but that structure is also gone,” he said in the broadcast. “Sorry for your loss. I really wish I could have delivered better news to you.”

Ujjain: A delegation of Jain Samaj reached Police Control Room on Saturday in support of Naresh Jain, an Ujjain Municipal Corporation sub-engineer accused in the suicide case of contractor Shubham Khandelwal. In a memorandum addressed to the SP, community members said that the police should stop harassing Jain’s family. They also alleged that Khandelwal himself was pressurising Jain into clearing bill of Rs 19 lakh against work of only Rs 9 lakh.

In the memorandum submitted to ASP Rupesh Dwivedi, under the banner of Vardhman Sthanakwasi Jain Shravak Sangh, they said that according to facts which came to the knowledge of the society, contractor Shubham Khandelwal was awarded a contract of Rs 12 lakh for construction work from Ujjain Municipal Corporation, in which he had completed the work of about Rs 9.72 lakh. Shubham pressurised Naresh Jain to accept the bill of Rs 19, 48,064. Jain had submitted it in the municipality citing work of Rs 9, 82,560 as per the work done on the spot. The deceased vandalized Jain’s house on the night of September 7 and threw stones at the window glass. Jain immediately informed municipal commissioner about the incident and lodged a complaint with the Kharakuan police station.

According to Jain community members, contractor Shubham Khandelwal died due to injury during a car accident. Describing these facts as the basis, they termed Naresh Jain innocent and demanded action against the culprit by thoroughly investigating the case.

Continue Reading
Law360 (October 2, 2020, 6:47 PM EDT) — Companies that do business with the federal government should find ways to grant employees’ requests for disability and religious accommodations in nearly all circumstances, a U.S. Department of Labor official said Friday.

“Generally, if you’re a federal contractor, you need to be granting almost every accommodation request,” Office of Federal Contract Compliance Programs director Craig Leen said. He spoke during a session on OFCCP equality initiatives at a virtual labor and employment conference hosted by New York University School of Law. Karen Gillen of O’Melveny & Myers LLP, who represents employers, moderated the discussion.

Leen said OFCCP has been scheduling employers for…

Stay ahead of the curve

In the legal profession, information is the key to success. You have to know what’s happening with clients, competitors, practice areas, and industries. Law360 provides the intelligence you need to remain an expert and beat the competition. 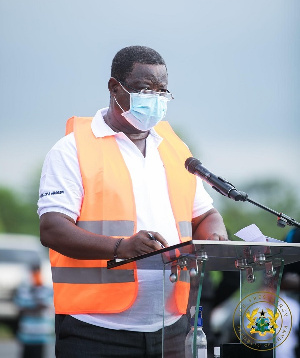 Roads and Highways Minister, Mr Kwesi Amoako-Atta has advised contractors working on the various road projects in the country to desist from doing shoddy works.

He said the road projects were important that it must be durable and must therefore stand the test of time for generations unborn to benefit.

The Minister also charged stakeholders and consultants to effectively monitor the projects and ensure that quality materials were used for the projects to meet its life span.

“The government cannot use taxpayers’ money to pay any contractor that has done shoddy work”. He stressed.

Mr Amoak-Atta, made the call during a press briefing at Sefwi Wiawso to provide an update on the ongoing road projects in the Region after President Akufo-Addo had inspected the various sites to ascertain the progress of work on some road projects and also cut the sod for the commencement of new roads projects within the Region as part of the President’s three days visit to the Western North Region.

The rest were the sod-cutting for the construction of the Akontombra-Dadieso and Enchi-Elubo roads.

Mr Amoako-Atta indicated that the region had a total road network size of about 3,745kilometers, out of which 33 were currently under construction in different communities within the Region.

He hinted that his outfit was planning to award another 38 more road projects to help solve the bad nature of roads in the area.

Mr Amoako Atta expressed satisfaction of work done so far, noting that apart from few contractors who have left their projects site due to the COVID-19 pandemic the

Here’s what you need to know:

The British government, in the grip of a second wave of coronavirus, on Tuesday told the nation’s workers to work from home if they could, a policy reversal that forced banks and other employers to readjust their corporate policies on the fly.

“We are once again asking office workers who can work from home to do so,” Prime Minister Boris Johnson said on Tuesday, adding that Britain had reached “a perilous turning point” as nearly 5,000 new coronavirus cases were reported the same day.

Companies that had been under pressure from government ministers to get employees back to the office were scrambling to change their guidance for staff. Some had organized rotation systems to alternate different teams in the office to ensure social distancing. Others supplied personal protective equipment, created one-way systems to move around offices and reconfigured desk spaces. Both JPMorgan Chase and Goldman Sachs were at about 30 percent capacity in their London offices.

Goldman Sachs sent a memo to staff notifying them of the government’s decision, but said that its London office would remain open for employees “who need to be in the office” and that safety precautions would remain in place. At Barclays, where several hundred employees had returned to work in offices around the country, company management said it would follow the government advice and have them work from home again.

The Confederation for British Industry, a large lobby group that has warned of “ghost towns” in city centers if more people didn’t return to their offices, said that new restrictions were needed to slow the spread of the virus, but